Browns schedule quirk may come to an end in 2018 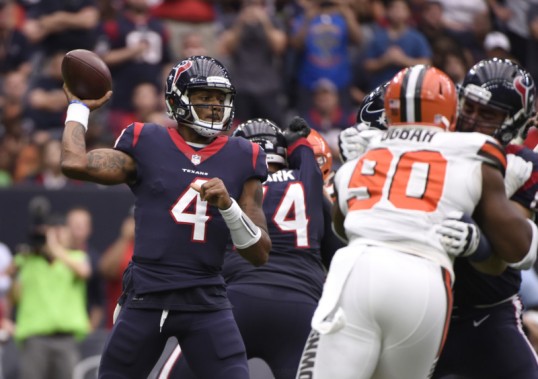 The Cleveland Browns will see some familiar faces on the opposing sidelines this fall during the 2018 NFL season.

In addition to the annual home-and-home series with AFC North suite mates the Pittsburgh Steelers, Baltimore Ravens and Cincinnati Bengals, the Browns take on the New York Jets for the fourth consecutive year, and the Houston Texans for the third time in the past five seasons.

With a little bit of luck, however, the Browns will see one scheduling quirk come to and end this season.

The Browns have played a team starting a rookie quarterback for seven consecutive seasons, and the results have been mixed:

The Browns don’t play the Buffalo Bills, who selected quarterback Josh Allen, or the Arizona Cardinals, who selected Josh Rosen, this season, so we can strike them from the equation.

There are still two realistic possible opportunities for Cleveland to keep the streak alive, however, starting with the Week 3 Thursday night game against the New York Jets, who selected quarterback Sam Darnold with the No. 3 overall pick of the 2018 NFL Draft.

Darnold is expected to start the season on the bench, but with the injury history of soon-to-be 39-year-old starting quarterback Josh McCown, it would not be a surprise to see Darnold jog onto the field at FirstEnergy Stadium on Sept. 20.

If McCown makes the start however, the Browns only other opportunity against a rookie quarterback* would come in Week 17, when the Browns close out the season on the road against the Baltimore Ravens.

Baltimore traded back into the first round to select quarterback Lamar Jackson with the No. 32 overall pick in last weekend’s draft. Joe Flacco is the starter in Baltimore, but if the Ravens have nothing to play for that final weekend, they may employ the always popular “see what you have” strategy and give Jackson a start.

The Browns have experienced all kinds of oddities over the years, and the streak of playing against rookie quarterbacks is one of those strange quirks that might finally come to an end this fall.

*The Browns will be playing the Kansas City Chiefs on Nov. 4 and the Chiefs will be starting first-year quarterback Patrick Mahomes. But Mahomes is not a rookie, so he doesn’t make the list.