Duke Johnson contract needs to be priority No. 1 for the Browns 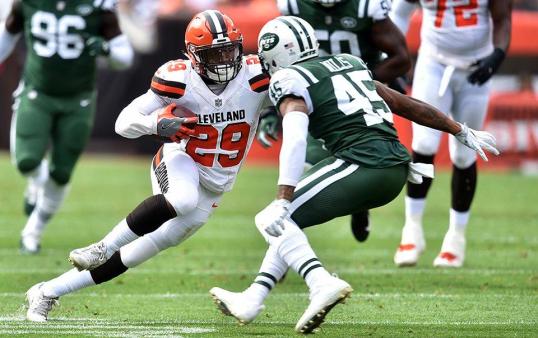 Since arriving in town, general manager John Dorsey has been busy reshaping the roster of the Cleveland Browns.

From trades, to free agency and the draft, Dorsey has worked overtime to bring in “his guys” in an attempt to accelerate the ongoing rebuilding efforts.

There is one item remaining, however, that should have a permanent spot at the top of Dorsey’s to do list:

The Browns need to sign running back Duke Johnson to a contract extension.

Johnson, a third-round selection in the 2015 NFL Draft, is entering the final season of his rookie contract. And it is not hyperbole to argue that Johnson has been the team’s best offensive player during his time in Cleveland.

Johnson’s 74 receptions last season set a franchise record for running backs and was the 11th most in a single season in team history. He also became just the ninth player in franchise history to catch more than 70 passes in a season.

Interestingly, Johnson has posted an average of 9.3 yards per reception with the Browns, just a tick below 10.1 yards per reception that wide receiver Jarvis Landry averaged in his four seasons with the Miami Dolphins. And Johnson did that while catching 78 percent of the passes thrown his way, compared to 70 percent for Landry. (Which is obviously very good as well).

So it is far to question why Dorsey would be in a rush to give a new contract that includes $47 million in guaranteed money to a player that has done nothing for the Browns – and averaged just four more yards from scrimmage a game over the past three seasons – before taking care of Johnson.

For his part, Johnson is being a team player about the situation, as he told ohio.com when asked about the slow pace of a new contract:

“I’ve learned that it takes time. It doesn’t happen overnight. That’s the one thing that I can say I learned. I’m not in [the negotiations]. I don’t talk to them much about x, y, z. I let them take care of it, let my agent in Philadelphia take care of it. But I did learn it takes forever.”

Dorsey has done some nice things in just a few months, from reshaping the quarterback position, to adding depth to the offensive line and rebuilding the secondary.

Now it is time to do what needs to be done and get The Duke under contract.