Archive for the category “uniforms”

About those alternate uniforms for the Cavs 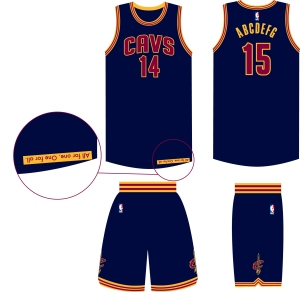 The Cleveland Cavaliers announced today that they will be wearing a navy blue alternate uniform this year that features wine and gold letters, numbers and trim.

According to the team’s website, the uniforms will be worn for the team’s season-opening game on Oct. 30 against New York and will rotate with what the team refers to as its gold uniform (c’mon, it’s really yellow) as the official alternates for the 2014-15 season.

“With so much excitement and positive momentum going into this season, this special time called for a brand new uniform to match the energy and mojo of the 2014-15 team,” Tracy Marek, Cavaliers CMO, said on the team’s website.

The jersey is OK for what it is, we’ve always liked navy blue as a complimentary color to burgundy, but it’s not as good as it could have been.

END_OF_DOCUMENT_TOKEN_TO_BE_REPLACED

Thank goodness for the Twins 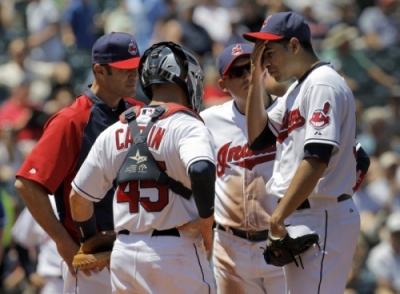 Remember how we were happy that the Royals were coming to town?

The Cleveland Indians head into a much-needed day off on Thursday having lost five of their last six games to close out the month of May.

During that streak, the Tribe’s starting rotation has worked 28 innings and given up 37 earned runs. That’s an ERA of 11.89.

“This was not a good series,” Indians manager Manny Acta said in published reports. “It’s been a rough week for us. Pitching sets the tone, and were not setting the (right) tone.”

Travis Hafner is on the disabled list and is scheduled for arthroscopic surgery on his right knee on Thursday and will most likely miss at least four to six weeks … Jack Hannahan is on the disabled list … Carlos Santana is still out with concussion symptoms … Rafael Perez was moved to the 60-day disabled list over the weekend … Acta will skip Ubaldo Jimenez’ turn in the rotation on Saturday so he can make his next start on the road against Detroit, even though Jimenez has a road ERA of 9.00 this year (compared to 3.38 at home) … anything we missed?

At least the last-place Twins are coming to town this weekend. That has to be a good thing, right?

END_OF_DOCUMENT_TOKEN_TO_BE_REPLACED

K2 a true Only in Cleveland story 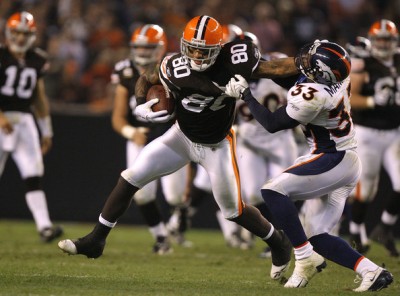 After all, the Bucs have a new coach and when you can get someone like Greg Schiano, who took Rutgers to the middle of the all-powerful Big East, well you just have to let him call the shots.

“(Schiano) said he was kind of upset that I wasn’t there working with the team in the offseason and for the first week of OTAs,” Winslow told the hosts of the The Opening Drive on Sirius NFL Radio.

“But look, I’ve been there the last three years and I’ve had a successful career so far. You don’t just get rid of one of your best players like that. I have nothing bad to say about Coach Schiano. It was just a disagreement on why I’m not there yet.”

Tampa likely shares the same concern the Browns did when they traded Winslow following the 2008 season – while he is talented and only 28, Winslow has the knee of an 80-year-old, and the thought of paying him base salaries of $3.3 million, $4.5 million, and $5.5 million over the next three years is more of a risk than Tampa probably wants to take.

Winslow is one of those Only in Cleveland stories that fans have come to know all too well over the years. Hugely talented when he was drafted out of Miami in the first round of the 2004 draft, Winslow broke his leg two games into his rookie season (during the Jeff Garcia 0.0 game, talk about an OIC moment) and missed the rest of the year.

END_OF_DOCUMENT_TOKEN_TO_BE_REPLACED

We read several sites on a daily basis and one that we find entertaining and informative is Uni Watch.

For those of you not familiar with the site, Uni Watch “Uni Watch “is a media project that deconstructs the finer points of sports uniforms in obsessive and excruciating detail. It has nothing to do with fashion — it’s about documenting and maintaining the visual history of sports design, and about minutiae fetishism as its own reward. If that concept doesn’t make sense to you, no problem — Uni Watch definitely isn’t for everyone, and there have always been people who Don’t Get It. But for those who understand the pleasures of detail obsession, programmatic classification systems, information overload, and sports history, you’ve come to the right place.”

The site was founded by Paul Lukas, a columnist for ESPN.com and a writer whose work has appeared in The New York Times, GQ, Fortune, Gourmet, Saveur, The Wall Street Journal, ESPN The Magazine, Spin and The Financial Times, among many other publications.

So we were particularly interested when weekend editor Phil Hecken recently wrote an article announcing a contest to rebrand the Cleveland Indians, asking readers to come up with ideas for a new team name and logo to replace Chief Wahoo.

Paul also made his feelings known in an article on Friday, What Do You Mean We, Paleface?

We reached out to Paul and Phil and they were gracious enough to sit down for a virtual question and answer session about the contest and Cleveland uniforms in general.