Archive for the category “Chief Wahoo”

Would dropping Chief Wahoo hurt the Tribe in the wallet?

As the debate ebbs and flows over whether or not the Cleveland Indians should drop Chief Wahoo as their logo, a look at what has happened when other teams have made the decision reveals an interesting fact: teams that make the switch may not see a negative impact on their financial bottom line.

The Emory Sports Marketing Analytics project analyzed the impact on universities that changed their American Indian name or mascot and found that, for the most part, the switch away from an American Indian mascot results in positive financial returns over the long run. The switch also has no long-term impact on a team’s brand equity.

END_OF_DOCUMENT_TOKEN_TO_BE_REPLACED

An answer to the Chief Wahoo question 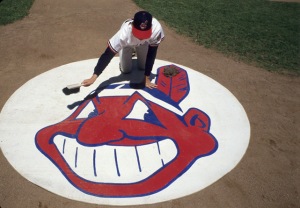 In recent weeks there has been a renewal in the discussion over the use of American Indian names and images in sports.

From calls – on both the local and national level – for the Washington Redskins to change their name, to a recent symposium at the Smithsonian’s National Museum of the American Indian on Racist Stereotypes and Cultural Appropriation in American Sports, the topic is gaining renewed attention.

While the discussion about the continued use of Chief Wahoo and the name Indians by the Cleveland Indians has gained more strong local attention than national, the topic is always going to be a divisive one in Northeast Ohio.

Which is why a recent column by Paul Lukas at ESPN caught our eye. In a follow-up to his piece on the symposium, Lukas interviewed Frank Cloutier, public relations director for the Saginaw Chippewa Indian Tribe in central Michigan, about the tribe’s position on the use of American Indian imagery and names. Cloutier’s explanation of the tribe’s position is an interesting one.

To find out what he said – and what it means for the Indians – head over to The Cleveland Fan.

We read several sites on a daily basis and one that we find entertaining and informative is Uni Watch.

For those of you not familiar with the site, Uni Watch “Uni Watch “is a media project that deconstructs the finer points of sports uniforms in obsessive and excruciating detail. It has nothing to do with fashion — it’s about documenting and maintaining the visual history of sports design, and about minutiae fetishism as its own reward. If that concept doesn’t make sense to you, no problem — Uni Watch definitely isn’t for everyone, and there have always been people who Don’t Get It. But for those who understand the pleasures of detail obsession, programmatic classification systems, information overload, and sports history, you’ve come to the right place.”

The site was founded by Paul Lukas, a columnist for ESPN.com and a writer whose work has appeared in The New York Times, GQ, Fortune, Gourmet, Saveur, The Wall Street Journal, ESPN The Magazine, Spin and The Financial Times, among many other publications.

So we were particularly interested when weekend editor Phil Hecken recently wrote an article announcing a contest to rebrand the Cleveland Indians, asking readers to come up with ideas for a new team name and logo to replace Chief Wahoo.

Paul also made his feelings known in an article on Friday, What Do You Mean We, Paleface?

We reached out to Paul and Phil and they were gracious enough to sit down for a virtual question and answer session about the contest and Cleveland uniforms in general.