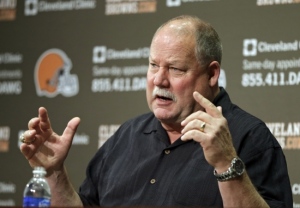 The Mike Holmgren era ended on Tuesday in Cleveland, not with a bang but with a bit of a wimper.

Holmgren held his final press conference as team president of the Cleveland Browns and, while he will stay on through the end of the season in a transitional role, his time is definitely up.

“I want to feel like I’m contributing,” Holmgren said. “My emphasis is going to be in the football side of it. I don’t have to do the business stuff anymore. If I can help one player be a little better this season or one coach be a little better with some of the things that I know how to do and I feel like I’m contributing, then that could happen. We’re just going to take it a day at a time and see how it goes.”

The Browns didn’t win enough under Holmgren – the team was 10-29 with Holmgren as team president – to satisfy a fan base that is running out of patience after countless rebuilds and restarts.

And he couldn’t win with the media, who were cranky that Holmgren would not talk to them whenever they demanded and got their feelings hurt when Holmgren didn’t wind up coaching the Browns – despite Holmgren and everyone associated with the Browns saying a number of times that would not happen.

“(The record is) not very good,” Holmgren admitted. “I know what we tried to do, and I know how we were trying to build the team. I think that’s the way you build a team, if you have time to do it. The record speaks for itself, and I think ultimately people are judged on how many games you win. There’s a lot more that goes into, as I learned, a lot more that goes into an organization than that, although that’s the thing that people look at. There are some things I feel very good about what we did here. We didn’t win enough games though. We did not win enough games. I’m hoping that table is set. I’m hoping that table is set for the future.”

While the final record is not what anyone would have hoped for, only the most obtuse would claim the Browns are not in a better place than they were three years ago. Holmgren rebuilt the football side into an actual NFL structure, with a general manager and a coach who each know their roles (there is now very little chance that coach Pat Shumur locks Tom Heckert in a closet on draft day and makes the picks himself). He made sure that Jim Brown was no longer whispering sweet nothings in Randy Lerner’s ear (and all you have to do is look at the Browns record while Brown was “advising” Lerner to realize how important that was). And there is no question that the roster is better.

Now, how much better is certainly open to debate. And while it is great that Heckert and Shumur have clearly defined roles, that doesn’t guarantee success (especially on game days; and definitely on fourth-and-one). But as long as the current roster remains mostly intact, the final chapter on Holmgren has yet to be written.

“I think I was asked to and I think we’ve fixed a number of problems in the organization,” Holmgren said. “If we wanted to list some things I could do that and feel good about it. Our won-loss record, which is what football teams exist for, hasn’t been good. Say what you want and I think there have been some unusual circumstances, but it hasn’t been very good. I would hope that if the current team and what we’ve built so far now has some success moving forward, I hope people will feel a little bit better about our time. I think it has been a three-year period fixing things. Unfortunately, some of those close games that were mentioned earlier, if we could have won half a dozen of some of those close games it would be a little painful right now.

“My time was shorter than I had hoped, but I understand what happened. I just wish the people who are going to be here well, and I’ll always care about this place and how we’ve been treated since we’ve been here. It’s been good.”

So that’s a wrap on the Big Show in Cleveland.

If he’s right – and Browns fans everywhere better hope he is – that the foundation is in place, then hopefully Joe Banner working full time can can finish the job.

If not, we may be doing this again in three years with Banner.