Archive for the tag “Liverpool”

As the Cleveland Browns continue to try and rebuild an offense that has averaged just a little more than 16 points a game for the past six seasons, there is a dynamic playmaker sitting in their backyard that would look good in Orange and Brown.

Archer had a solid weekend at the NFL combine (for what that is worth), bench pressing 225 pounds 20 times and running official 4.26 in the 40-yard dash (holy crap!). And while that may not have been fast enough to break Chris Johnson’s record of 4.24, it’s still pretty darn fast.

END_OF_DOCUMENT_TOKEN_TO_BE_REPLACED

Nothing is ever concrete until a player signs a new deal, but it is encouraging to hear reports that the Cleveland Browns are working to resign All Pros Alex Mack and T.J. Ward before they hit free agency next month.

The season-long fear was that the Browns would let Mack and Ward walk in free agency because they play positions that then-CEO Joe Banner did not deem worthy of a big-money contract. But now that general manager Ray Farmer is running the show, things may be different.

Say what you will about Ward and Mack – we know they have their detractors – but they are very good players (especially Mack, who has yet to miss a game in five seasons in Cleveland) and they both seem to get more credit from outside of Cleveland than they do closer to home. If the Browns are serious about getting better, they are the kind of players the team needs to keep.

The Browns also have numerous other holes to fill across the roster and it seems counter-productive to create more problems for yourself by not signing two of your best players and creating even more holes. You also don’t want to run the risk of letting them hit free agency, where all it would take is one desperate team to throw a bunch of money at them, and having them walk away.

END_OF_DOCUMENT_TOKEN_TO_BE_REPLACED

Never underestimate the power of a good day in Cleveland

When we woke up this morning we were afraid that Tuesday’s blockbuster news from the Cleveland Browns had only been some beautiful dream.

But then we realized that it was true, Jimmy Haslam really had rid the Browns of general manager Mike Lombardi (and CEO Joe Banner) and we knew it was going to be a beautiful day.

The day only got better with the news that new general manager Ray Farmer is not only talking with Pro Bowl cornerback Joe Haden about a contract extension, but Farmer may also value Pro Bowl centers and Pro Bowl safeties more than Banner.

The news was so positive surrounding the Browns that the good vibes spread far beyond the walls of 76 Lou Groza Blvd. in Berea.

END_OF_DOCUMENT_TOKEN_TO_BE_REPLACED

With revenue down at the Horseshoe Casino in January, casino owner Dan Gilbert had some free time on his hands and that helped him remember that he also owns a basketball team in town.

Without the casino distracting him for a few minutes, Gilbert discovered that the Cleveland Cavaliers are currently in the midst of their fourth consecutive dismal season and realized that he need to make some kind of move to show that he still cares about what happens inside Quicken Loans Arena.

Once Gilbert decided to do the ever popular “something” to show the fans that he still cares, the question became what to do.

END_OF_DOCUMENT_TOKEN_TO_BE_REPLACED

With the calendar turning over the weekend to February, that means we are only a little more than a week away from the start of spring training for the Cleveland Indians.

The one position that we are most interested in following is the one at third base, where Carlos Santana is attempting to transition from being the former starting catcher to a viable option in the field at third base.

Santana sounds like he is all in on the switch, telling ESPN Deportes a few weeks ago that he is preparing to “play third base, not other position,” as those are “the plans of the (Indians).” Santana spent his time in the Dominican Winter League working at his potential new position in the field.

While Santana seems convinced of the switch, general manager Chris Antonetti isn’t ready to hand the position over just yet.

END_OF_DOCUMENT_TOKEN_TO_BE_REPLACED 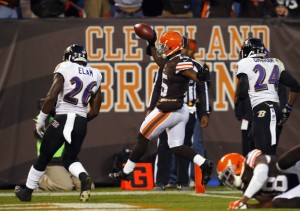 It was quite the week for Cleveland Browns wide receiver Davone Bess, one where every time you thought you’d heard it all something new would come out.

Things started when Bess was arrested on Friday at Fort Lauderdale-Hollywood International Airport and charged with simple assault on an officer, disorderly conduct and resisting an officer without violence. It then escalated on Saturday when Bess posted a naked photo of himself on Twitter; later in the day Coral Springs police officers came to the hotel where Bess was staying at on Saturday for what police are calling a medical call.

Then there is the fact that this isn’t the first time that Bess has had a problem. In March, it took six Broward County sheriff’s deputies to restrain Bess at his home. According to police reports, Bess was allegedly screaming, “Hide the guns!” “Where is my weed?” and “I want to get in the end zone; throw me the football!” That incident did not come to light until Friday afternoon, which will be an important point to remember in a moment.

There are three takeaways from the ongoing situation with Bess, the first dealing with Bess himself.

END_OF_DOCUMENT_TOKEN_TO_BE_REPLACED

Cleveland Browns owner Jimmy Haslam dropped a letter to season-ticket holders on Wednesday outlining just what the Browns are up to with their ongoing search for a new coach.

And while Haslam’s letter lacked the playful whimsy of the infamous Comic Sans letter that Cleveland Cavaliers owner Dan Gilbert sent a few years ago, it did contain a couple of items that are important to remember.

END_OF_DOCUMENT_TOKEN_TO_BE_REPLACED

Following Liverpool’s 2-1 loss to Manchester City on Boxing Day, Reds manager Brendan Rodgers left no doubt as to how he felt about the officiating at the Etihad Stadium.

Rodgers let loose on the officials after they failed to call a possible penalty on a Luis Suárez take down and when they waved off a Raheem Sterling goal after ruling Sterling offsides – when it was clear that Sterling was in an on-side position.

“They had no help whatsoever from the officials. I never go on about officials but I thought today they were horrendous, in terms of performance.” he said. “We had nothing that went our way at all. I thought that the linesman on the offside one – they weren’t even on the same cut of grass, and if you’re working at this level, you have to get that right. It’s not even a difficult one, that. These are the things we work on and talk about, we are asking a young player to try and break their line. It was a perfect timed run and he’s given offside when he’s through one-on-one on goal.

“Listen, the officials make mistakes. I just felt that the mistakes made tonight shouldn’t have happened at this level.”

END_OF_DOCUMENT_TOKEN_TO_BE_REPLACED

With one game remaining in the regular season for the Cleveland Browns – and in Pittsburgh, no less. Happy Holidays! – there isn’t very much left to say about another dismal NFL campaign.

A six-game losing streak; five consecutive losses on the road; an offense that leads the NFL in pass attempts despite having Jason Campbell, Brandon Weeden and Brian Hoyer on the roster; a defense that has gotten worse as the season went along; we’ve seen it all before but somehow it seems worse this time around.

Coach Rob Chudzinski once again talked about the team’s resiliency in his Tuesday press conference, but with the team repeatedly coming up short his words are starting to sound a little hollow.

END_OF_DOCUMENT_TOKEN_TO_BE_REPLACED

In a move that seemed unlikely just a few months ago, Liverpool is reportedly talking with Luis Suárez about a contract extension that would make the mercurial goal scorer the highest-paid player on the team.

According to multiple reports, Liverpool manager director Ian Ayre is in Barcelona to talk with agent Pere Guardiola about a long-term deal to keep Suárez at Anfield – and away from the big-money clubs on the continent.

All this after a summer of drama with a bid from Arsenal, Suárez publicly saying he wanted out (not just of Liverpool but out of England all together) and the club holding firm that he was not for sale at any price.